Irregular Adjectives in Comparatives and Superlatives

There are three forms of comparison:

Comparative adjectives are used to compare differences between the two objects they modify (larger, smaller, faster, higher). They are used in sentences where two nouns are compared, in this pattern.

Superlative adjectives are used to describe an object which is at the upper or lower limit of a quality (the tallest, the smallest, the fastest, the highest). They are used in sentences where a subject is compared to a group of objects.

In English, you can usually add -er or -est to the end of an adjective to make it comparative or superlative. For example, “cool” can be modified to become “cooler” or “coolest.” But some adjectives are irregular and are modified differently. Here is a list of irregular adjectives in English. 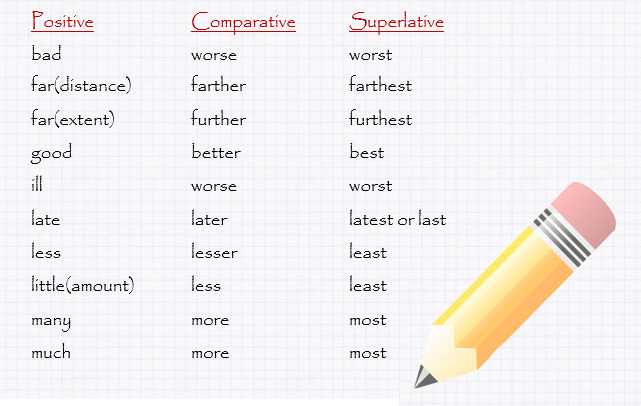 The book was better than the movie.

She ran farther than the rest.

Today is the worst day I've had in a long time.

This is the least expensive sweater in the store.