Two-way prepositions (Wechselpräpositionen) are prepositions that change their case depending on how they are used.

Akkusativ: Die Leute gehen in die Kirche. The people are going into the church. (motion >wohin)

Dativ: Die Leute sitzen in der Kirche. The people are sitting in the church. (location, wo, X marks the spot) 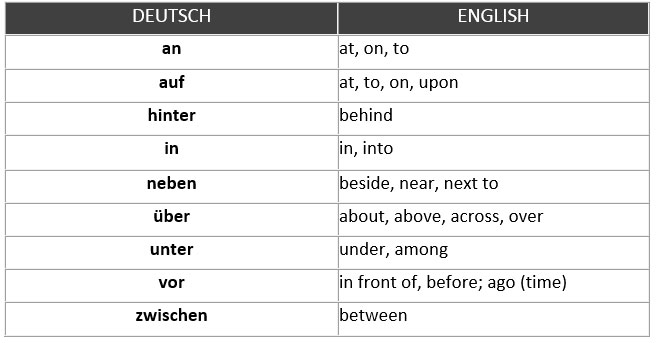 - An is used for on when we refer to vertical surfaces. We also use it for dates (+ dative).

- We use auf for on horizontal surfaces. We don’t use auf in a temporal sense.

- Hinter means behind. We don’t use hinter in a temporal sense either.

-  For movement (accusative) in means “into”.  In is also used temporally (+ dative) with months and to suggest a time in the future.

- Neben is used for beside as in physically beside something. But it can also be used to suggest in addition to and for comparisons.

- Über means above when talking where something is located it means “above” or “over”. We also use it to say what we are talking “about” or what something is “about”. Temporally it means “over” as in over a period of time.

- Unter somewhat looks like the English “under”, which is an easy way to remember it. We can also use it for saying that we are among a group of people. Temporally, unter is used the most in the set phrase “unter der Woche” (during the week).

- Locally vor means “in front of” and “before”. Temporally it means “ago”.  You’ll often hear it with time also meaning “before” as in “Zehn vor acht” (Ten to eight). We also use vor with the set phrase “vor Angst” (out of fear) and “Angst vor etwas haben” (to be afraid of something).

- We use zwischen just like “between” in English. Like with all of the prepositions you must always ask yourself is there movement or is it static / temporal?