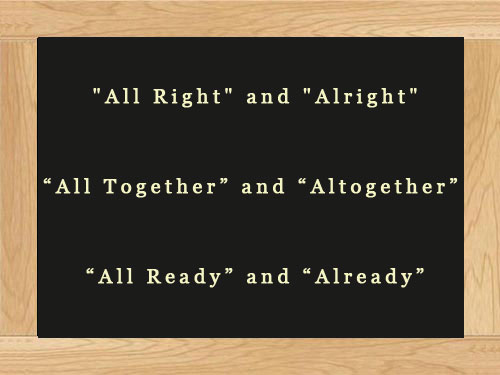 All Right vs Alright

All right has multiple meanings. It can mean ok, acceptable, unhurt.

The single word spelling alright has never been accepted as standard.

All Together vs Altogether

The adverb altogether means wholly, to the full extent, or with everything considered.

Examples: I left him altogether convinced that the project will end on time.

The term all together pertains to when a group acts or is acted upon collectively. (Of note, there can be other words betweenall and together.)

Examples: I want you to sing all together.  (I want you all to sing together.)

All ready vs Already

All ready - all prepared

Example: We were all ready to leave

Alreay - prior to a specified or implied time

Example: She has already graduated