A pronoun is a word that takes the place of one or more nouns. 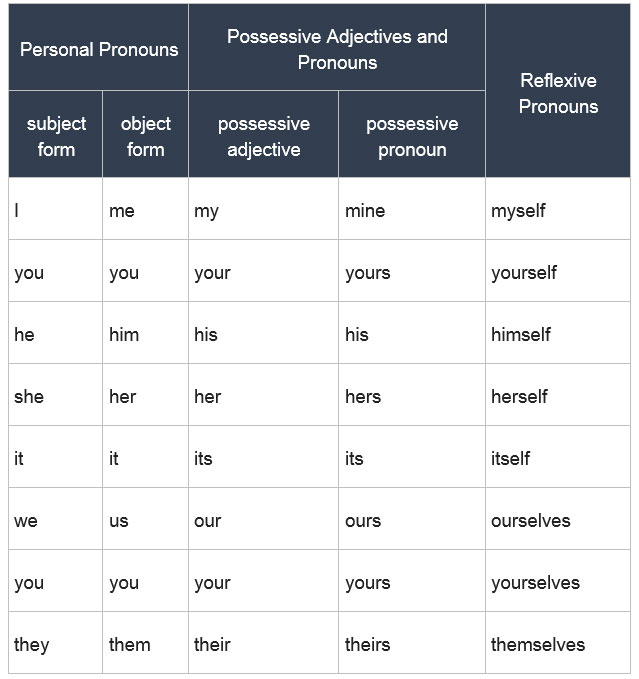 A demonstrative pronoun represents a thing or things:

A relative pronoun is a pronoun that introduces a relative clause. It is called a "relative" pronoun because it "relates" to the word that its relative clause modifies.

In English, the relative pronouns are:

The indefinite pronouns are:

Plural: both, few, many, others, several

The intensive pronouns (also called emphatic pronouns) are myself, yourself,herself, himself, itself, ourselves, yourselves, and themselves.

An intensive pronoun refers back to another noun (or pronoun) in the sentence to emphasize it.

The reflexive pronouns are myself, yourself, herself, himself, itself, ourselves,yourselves and themselves.

These words can be either reflexive pronouns or emphatic pronouns.

A reflexive pronoun is used with another noun (or pronoun) when something does something to itself.

We use interrogative pronouns to ask questions.

There are four main interrogative pronouns: who, whom, what, which

The reciprocal pronouns are each other and one another. They are convenient forms for combining ideas.

There are only two reciprocal pronouns, and they are both two words:

A reciprocal pronoun expresses a mutual action or relationship.