The 10 Most Common Grammar Errors That Aren't 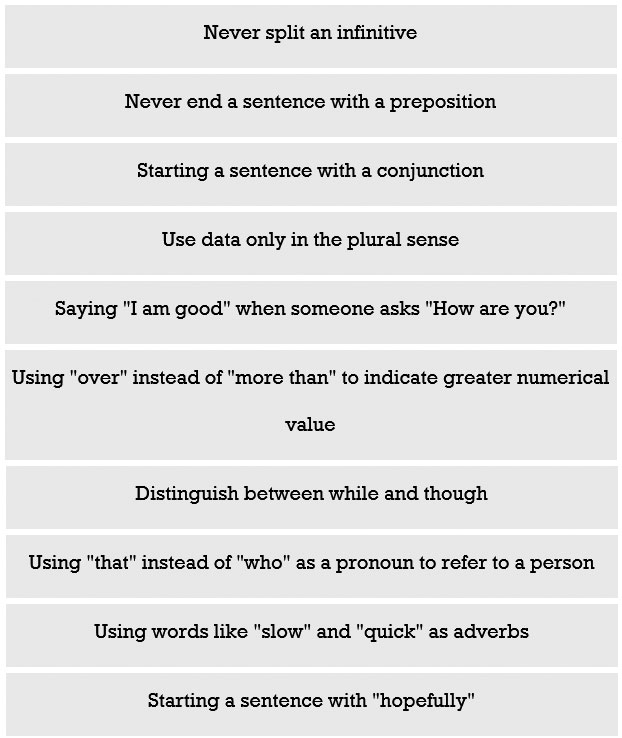 The rule against splitting infinitives — that is, putting an adverb between the word to and a verb — was pretty much made up out of whole cloth by early 19-century grammarians, apparently because they felt the proper model for English was Latin, and in Latin, infinitive-splitting is impossible. However, English is not Latin, and infinitives have been profitably split by many great writers, from Hemingway ("But I would come back to where it pleases me to live; to really live") to Gene Rodenberry  ("to boldly go where no man has gone before").

Never end a sentence with a preposition:

The stricture against closing sentences with words that describe position stems from an eighteen-century fetish for the supposed perfection of classical Latin, which allowed no split infinitives — for the excellent reason that Latin infinitives consist of single words. English, however, being a distant relative of that language, should be allowed to form its own customs.

Starting a sentence with a conjunction:

For an honorable tradition of doing just that exists.

But some people persist in prohibiting this technique.

Yet we defy them.

Or we simply ignore them or laugh at them, neither of which they appreciate.

Use data only in the plural sense:

Where did they get this data? The alternative is to use datum in the singular sense, which makes you sound like a propellerhead. (Look it up, kids.) People who say “datum” get data, but they don’t get dates.

Saying "I am good" when someone asks "How are you?"

English speakers tend to mistakenly correct themselves by saying "I am well" instead of "I am good" because they recognize that "am" is a verb, a form of "to be." And since it's a verb, people often figure, you pair it with an adverb (like well), not an adjective (like good). But what these folks are forgetting is that the verb "to be" is a linking verb. But with a linking verb, you are describing your state—good, bad, purple, in a hurry, whatever. The same applies to verbs like "to seem" and "to appear," and in certain cases to sensing verbs, like "to smell" ("You smell good." vs. "You smell well.") and "to feel."

Using "over" instead of "more than" to indicate greater numerical value:

if you are talking about a quantity of something, then you should use "more than" to describe a greater amount, e.g. "The stables housed more than a thousand horses." But if you are discussing spatial dimensions, then you should use "over" to discuss greater dimensions, e.g. "The mountain was over 20,000 feet tall." But perhaps the final the death knell of this distinction sounded just this year when the Associated Press announced a change to the AP Stylebook: "more than" and "over" are now both acceptable ways to indicate greater numerical value.

Distinguish between while and though:

Petty prescriptivists would have you reserve while for temporal usage only: “While I agree, I resist,” they say, should be revised to “Though I agree, I resist.” I freely admit that I often change while to though, and while I understand — I’m sorry, I can’t stop myself — and though I understand that it may seem pedantic, I think though reads better.