10 Overused Words and What to Use Instead 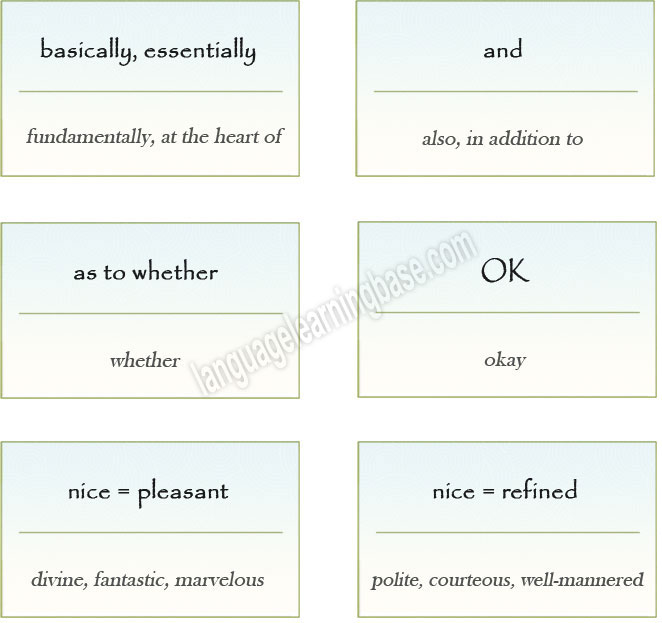 “basically” or “essentially” — Overused words meaning “fundamentally” or “at the heart of.” Use those words instead.

"and" — Typically overused by being placed multiple times in the same sentence. Simply break up the sentence into multiple sentences or replace the conjunction with the words “also” or “in addition to.”

“like” — Typically overused in speech, this word should never be used as a replacement of “said” in written text.

"as to whether" — the single word whether will suffice.

"etc." —  this abbreviation often suggests a king of laziness. It might be better to provide one more example, thereby suggesting that you could have written more, but chose not to.

“seems” — This word weakens the sentence it is used in. If something happens it shouldn’t “seem to” happen it should simply happen.

"OK" — Overused and misused by unnecessary abbreviation. Instead use “okay.”

“had”, “even,” “that” — Overused as filler words that convey little or no extra meaning to the sentences they are included in. Remove these words whenever possible.

“honestly” — originally meant “in an honest and genuine manner”, but is now often used as general verbal filler. Do they honestly don’t know what’s going on? As if without the “honestly”, you would think they’re lying.

10 boring words and what to use instead: http://languagelearningbase.com/89715/10-boring-words-and-what-to-use-instead