Wrong vs Mistake vs Error

How can use the words "Wrong", "Mistake" and "Error"? What's the main difference between these words?

'Wrong' means that something is not correct. It is not a noun but an adjective. So you should use it as a normal adjective:

This answer is wrong! - You bought the wrong car!

The only difference between these two is that an 'error' is a mistake that you may find in a calculation or in a decision. For example:

'I must admit! I made an error in rejecting that job offer!'

Wrong= Not correct ex. You took the wrong way= There is a right way.

Error= To do something wrong due to ignorance or poor knowledge (You think it is correct but it is not) ex. It was an error to do business with that nasty guy, he cheated us.

Mistake= you have the knowledge but in a slip you make something wrong. (Involuntary)

ex. Ups! Sorry for drink up all your beer, I was absent minded. It was a mistake. 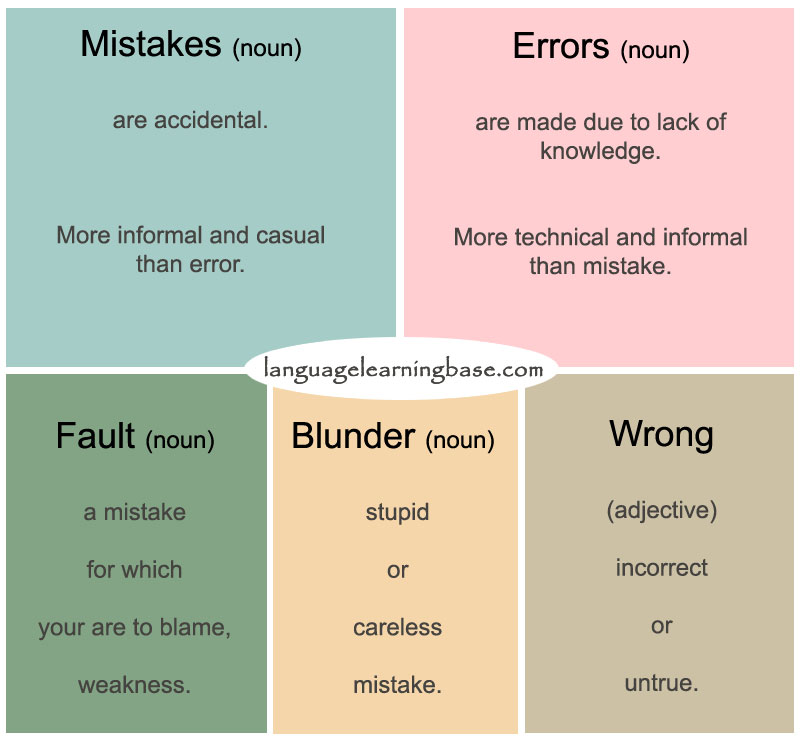 It was a big mistake to leave your umbrella at home.

Coming to this place was a big mistake. We only wasted our time.

It was a mistake to go there on Sunday.

I committed a mistake of leaving our bedroom window open.

The grammatical errors in this Book could not be ignored.

The essay contains a number of typing errors.

The computer produced an error when the data was incorrect.

I made an error in my calculations.

It was not his fault that his team lost the match.

It was my fault that there was an error in the computer program.

I made a terrible blunder in introducing that beautiful girl to my husband.

He said that the tax was a major political blunder.

I made a blunder by getting his name wrong.

Some of your answers were correct, and some were wrong .

Something is wrong with my cellphone .

It is wrong to lie.

You're wrong: he's not Superman at all.